These terms can be used to describe financial deserts – urban and rural communities where money moves in slow and costly ways – making them extremely financially fragile and vulnerable as the U.S. economy shifts into the digital age.

What does it mean to be Unbanked?
Unbanked refers to individuals who don’t have access to the mainstream financial system (e.g., banks or credit unions). People that are unbanked rely on alternative service providers (i.e. check cashing centers) for financial transactions. According to a study conducted by the Federal Deposit Insurance Corporation (FDIC), approximately 8.4 million U.S. households were considered unbanked in 2017.

What does it mean to be Underbanked?
Underbanked refers to people who may have access to a savings or checking account, but still rely on alternative services like check cashers, money orders or pawn shops. According to the FDIC, approximately 48.9 million adults and 15.4 million children were underbanked in 2017.

What does it mean to be Underserved?
Underserved is a term used interchangeably to reflect individuals who are unbanked or underbanked. Financially underserved families and individuals pay a high price for managing their money outside of the digital economy.

For example, 9.5% of the average underserved household’s income is spent on interest and fees for using alternative financial services. That’s the same percentage that the average U.S. household spends on food each year.

Financial Deserts
Combined, these words create circumstances known as financial deserts – urban and rural communities where money moves in slow and costly ways – making them extremely financially fragile and vulnerable as the U.S. economy shifts into the digital age. 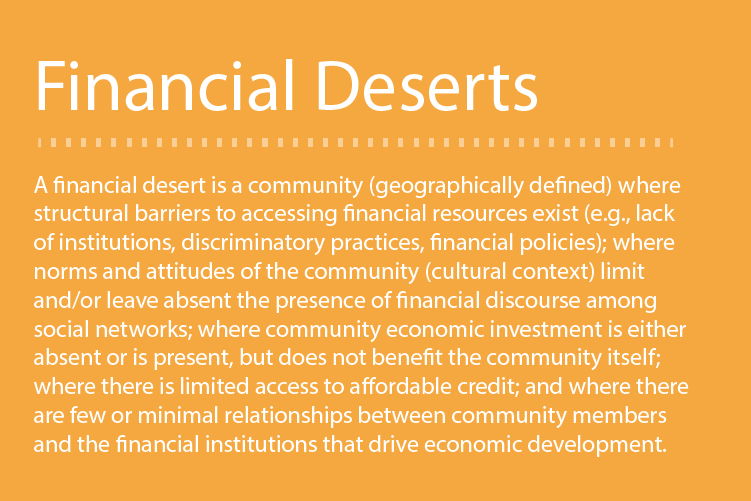 Knowing the differences between unbanked, underbanked and underserved, we can better understand the challenges in our current system and work towards improving financial inclusion in our society to move towards a more equitable financial future.

By improving access to financial education, Master Your Card and its partners are working together to help people in Financial Deserts feel less vulnerable and more financially secure. Master Your Card is here to start the conversation—and help individuals and families who are living in financial deserts work towards financial inclusion.

Need help with your Mastercard? We're always here where you need us